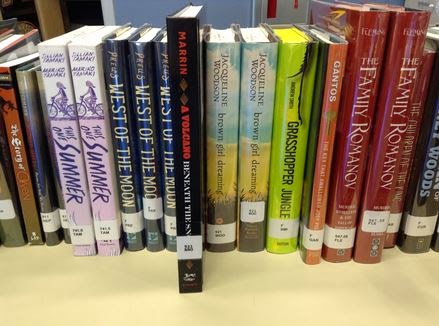 For the 2015 Battle of the Books or Mock BOB, the students made their selections of their favorite books in Round 1 by completing a Google form that I created.  I was hoping to get more kids to participate this year by asking them to vote virtually rather than last year's battle when students made live presentations defending each of the titles. Only 45 students cast their vote in this first round, which is 10% of the school and about the same number as participated in each round in 2014. I sent the students a link to the form via email, put the link in the daily announcements that are sent to all students and teachers, and gave the students five days to make their selections.

The Google form was an easy way to set up the voting because I could insert a picture of the book covers with blurbs. I had students help me create the blurbs about each of the books. You can see two examples of the 8 battles below.


I like using the School Library Journal brackets with 16 books for our battle because the Battle Commander always selects outstanding books. Some of the books we may have in the library, but if the book wasn't on my radar, it probably is a title that I should have on the shelf. There is usually a mix of middle grade and YA which suits the age level of my students, and the mix of genres means there is something for everyone. Also, the students can follow along to see if they make the same choices as the author judges of the SLJ Battle.

Here are the students' selections in Round 1:
Battle 2
Battle 3
Battle 4
Battle 5
Battle 6
Battle 7
Battle 8
Only two of the books selected by the PFTSTA students went on to Round 2 in the SLJ Battle. Those are El Deafo and This One Summer. These are graphic novels that several of my students have read and loved.

Tuesday, SLJ will post their overall winner, but we will continue with our battles until a winning book can be declared. Round 2 will also be done virtually and will be sent out early next week. Follow at the end of the week to see the students' choices in that round.