Book Fair and Teen Read Week are Both a Memory


I really did myself in by planning a book fair one week and Teen Read Week the next. Unfortunately, both weeks were out of my control. We now schedule the book fair during the two days that the grandparents visit the school for breakfast. This has proven very lucrative for the library, and I like promoting a fund raiser that promotes books and reading. The grandparents like buying books for their grandchildren. It is a win win situation. This year we grossed $300 more than last at the book fair, and the library received a net profit of $1500 plus just over $300 in Scholastic dollars to spend on new books for the library. This is the only fund raiser that the library holds during the year. I also raise a few hundred dollars a year in fines which I strongly believe in. More on fines at a later date. 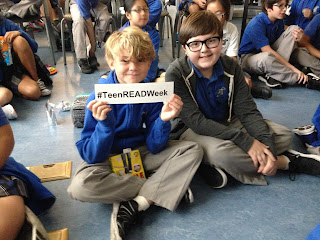 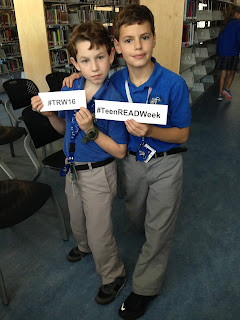 I always try to schedule Teen Read Week (TRW) during the week that YALSA has it on the calendar. I know that really isn't crucial, but it is what I like to do. Most of the TRW activities take place during the lunch periods. After the switch last year to three lunches, I had to rethink my planning. Actually, what I needed to do was simplify. With two lunches, the high school students could supervise and monitor my many games. Now I tap the older students to help me plan, but I am the one who has to take control of all the activities. That is not an issue if I only have one thing going on each day.

I think that it was very successful this year. I scheduled a public librarian to come and give book talks. All three of her sessions were well attended. My students tend to be public library users and almost all said that they had library cards. We always watch an episode of the Twilight Zone that fits the theme of TRW. Since the theme was Read for the fun of it, I wanted to find a funny episode. I chose one with black humor, and the tweens through the teens just loved "Escape Clause." We had some good discussion about the episode after all three showings. I think that this episode was beloved by more students than other one that I have shown during TRW. One student returned the next day telling me she went home and watched more episodes. She had heard of it, but never seen it before. We always play a guessing game based on books and movies as well as a craft. Daily, I had 25 to 35 students during 6th and 7th grade lunch, the same for high school, and about 10 to 15 during 8th grade lunch. That is not bad in a school of 600. Also, some students saved some money on fines, as we always have fine forgiveness week during TRW. I am still waiting on entry forms for our annual bookmark contest. The prizes for that contest are $20 Barnes and Noble gift cards. Though I might not get many entries, I always get some outstanding illustrations.


You can see more pictures of the week on the library website here. As soon as the bookmark contest winners are selected, I will add pictures of the bookmarks on that webpage. During TRW, I like to get students to make some book recommendations. I have posted many of them here on the library website. Hopefully, I can add some more of those pictures next week. The kids liked selecting an appropriate hashtag to put with beloved books.