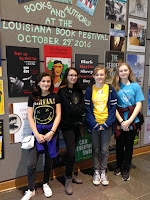 Last year, I had planned to take members of Bookmarked to Baton Rouge for the annual book festival. The predicted rain storms kept us away which was a good thing because the festival closed early due to the rain, and the book tents had ankle deep water. For 2016, I again planned a trip to Baton Rouge for the festival, and the day was glorious with sunshine and warmth.

Four students met me on the steps of the State Library of Louisiana to begin our day. We started in the cooking demonstration tent where Shelly Rushing Tomlinson was reading a story from her cookbook. She is a humorist, but I don't think her funny family stories were appreciated by the teens. They did eat her crackers and pimento cheese, though.

Next we went to hear authors Susan Vaught and Rita Williams-Garcia. This was so cool. We walked into an almost empty room where Susan was sitting and waiting to begin. When she started, it was like we were getting a very personal presentation. Rita Williams-Garcia walked in a few minutes after the start time, and a few others filled the seats of the audience. Both authors were talking about their books that were set back in time and could be considered historical fiction. However, the stories were personal to their own childhood. Vaught lived in Oxford during the Meredith Riot at Ole Miss in 1962, and she had family who worked at the university. Williams-Garcia's mother was a member of the Black Panther Party in the 60's. Both women felt that they could tell the stories best because of their personal connections to the place and time. Though many writers will conduct hours of research for their fictional work, in the case of these two authors, they actually lived it.

Two things about this panel made it fascinating to me. One was the idea of the story within the story that both authors used in their work. In both cases, the authors needed to write much of the fictional work that is referenced in their book. In the case of Vaught, her main character had written a book that had won the Pulitzer Prize which put much pressure on her to carefully construct the excerpts included at the beginning of each chapter of Things Too Huge to Fix by Saying Sorry. The discussion at the end about what constitutes historical fiction was also very interesting to me. Some in the audience thought a book would need to be about time before and up to World War II. One of my students thought anything written about a time before September 11, 2001 was historical fiction. There is certainly no hard and fast rule, but I am curious how other librarians view works in the genre of historical fiction and appropriate dates. 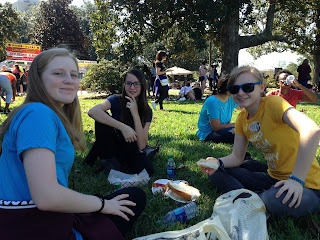 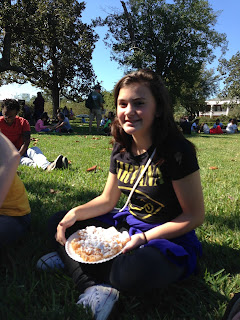 We took time off to buy books to get signed, eat lunch, and sit down under a shady tree for a rest.

The panel we attended after lunch panel included authors Tessa Gratton and J. L. Mulvihill. I had seen Gratton when she visited the book festival two years ago. She even remembered me and that was very cool. I am very familiar with Gratton's fantasy work, but not with Mulvhill's. They both talked a lot about world building, and the importance of knowing how a character would behave in the world before beginning to write the story. Gratton is planning a new book right now and doesn't think that she will be able to actually begin the book for 18 more months. Mulvihill still has a day job as a paralegal. She must set aside specific time in her day to think and write because she must stay focused at work. Both authors were very personable and engaged in conversations with me and my students after the panel discussion.

As we walked around the festival grounds, we spotted many teens wearing a shirt that said, "Books Make Muggles into Wizards." On the sleeve was a thunder bolt with THS Library. We found out that the library club at Thibodaux High School made the shirts. I am sorry that I did not get a picture of thet shirts to share. I didn't know this is a common saying that my students had seen before. It gave us some ideas about shirts that we should create for Bookmarked.
authors book festival Bookmarked Field Trip j. L. Mulvihill Louisiana Book Festival Rita Williams-Garcia Susan Vaught Tessa Gratton YA Lit Young Adult Literature