Look How the PFTSTA Library is Growing

February 16, 2011
A few months ago, my principal, Jaime Zapico, stopped by the library. I mentioned that it was a shame that the shelving I ordered when the library was established was only 42 inches high. That height gave me three shelves, though I was putting books on the wooden top because of lack of shelf space. I had realized in hindsight that I should have ordered taller shelves from the start. When I opened the PFTSTA Library in August of 2006, the district administration promised that the school would be moving into a brand new state of the art building in three years. This is now my fifth year at Taylor, and the new building is nowhere in sight. There are about 6,100 books in the collection. The current shelving could not hold all the books even with several hundred books checked out.
Jaime said that since construction on the new site has not begun, she imagines that Taylor will be in the current location for several years. She also told me to get a price for new shelving. I got a price, and we were able to reuse all the shelves and the brackets. Below you will see some before and after pics of the library.
Here is a picture of the non-fiction and reference section of the library from one angle. 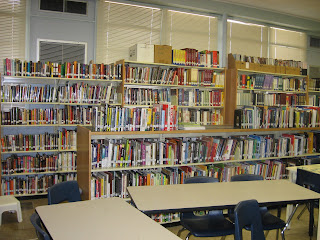 Here is a picture of the same section from a different angle. 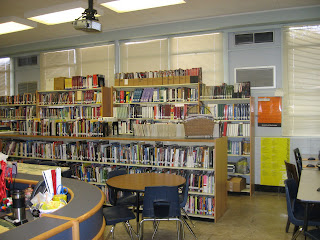 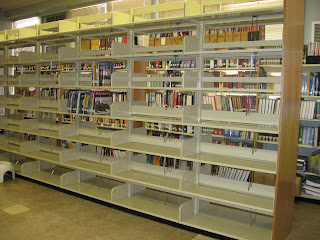 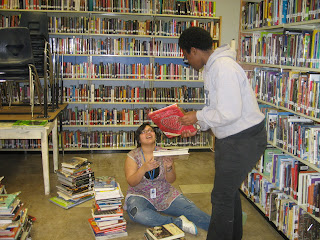 I like having some extra hands to move the heavy books. 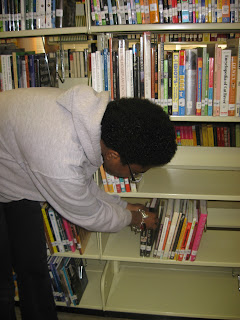 I started to restock the shelves at lunchtime yesterday,
and finished today in time for the lunch crowd to hang in the library. 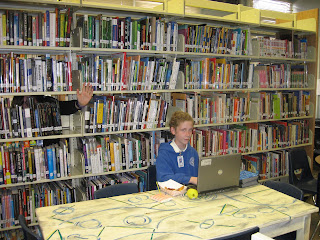