AASL and the Gale TEAMS Award

November 01, 2011
﻿So much has happened in the last week. I don't know where to start. Attending the AASL conference in Minneapolis was a great experience. I have lots of ideas running through my head. I hope to implement some of them over the next couple of months. I need to make some decisions in my library on how to spend money on electronic books. I have a collection of over 350 reference in electronic format, but I want to start purchasing non-fiction titles that the students would use as supplemental material to their textbooks. During the conference I talked to Rosen Publishing about their ePoint Books and Follett about their Follett Shelf, and of course I can always add to to our existing Gale Virtual Reference Library.

﻿There are some super-star librarians out there who are doing amazing things. Listening to them talk about all that they do means that some of them must never sleep. I got to meet a few of them during the conference, and I was really inspired by the information that they presented. I attended a session on emerging leaders, and this is a picture of some of those women taken during that session.
﻿
﻿Really the highlight of the whole conference was the award reception held on Friday night at Crave Minneapolis. Gale and Library Media Connection put together an event where we were the stars. Check out this video that I made with pictures from AASL: some were from the reception on Friday night and others from the Gale booth in the exhibit hall; as well as pictures from PFTSTA; and some screenshots of the electronic resources that we used in the project that garnered us the award. The audio portion of the video are the acceptance speeches first from myself and then from Lisa Valence the English teacher who collaborated with me.

We were on a high when we returned to the hotel after the Gale event. A librarian from Minnesota walked with us because she wanted to bend my ear. She works in an elementary school, and I really don't think that I had the answers that she needed about getting her students using the databases. The picture below was taken at the Hilton from left to right is Lisa Valence, myself, and Ruth Ann Nadeau from New Orleans who inspired me to be a librarian in the first place. 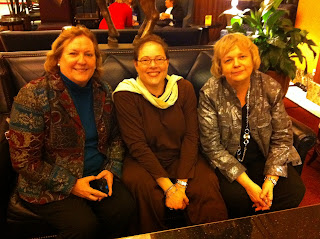 None of the pictures that we took at the reception were very good. The lighting was low, and even though we tried with several cameras all the pictures were dark with an orange cast. The next day we went to the Gale booth in the exhibit hall and got a picture taken there with the big check that was bright and clear. The screen behind us shows the first scene of the video that Gale showed in the booth throughout the conference as well as during the reception. Holding the check from left to right are Chris Posa from Gale, Lisa Valence and myself. 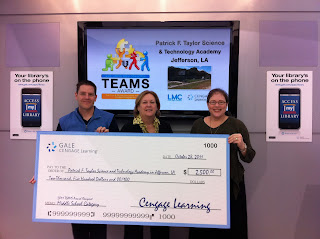 Enough already with the pictures of me. I think that I need to find some new subjects. Like maybe my students!