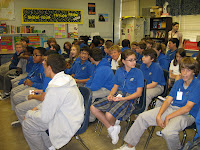 On November 15th, the 6th graders all gathered in one room to see Jeff Kinney launch his newest book, Diary of a Wimpy Kid: Cabin Fever. He was at the Banks Street School In New York in front of an auditorium of 8 to12 year olds. There were over 800 schools around the county who joined the event via the computer like us.

The video of him talking was shown in a small window on the screen that I could not enlarge. This frustrated the kids, but I had not control over it. He explained how he got started in the book biz and some of the motivation for his work. He also showed a lot of his illustrations. Luckily, the pictures were slides that we could enlarge for viewing. I especially like the "Reading is Fun" that you see on the right.

Half way through the presentation he introduced the two boys, Zachary Gordon and Robert Capron, who play the lead characters in the Wimpy Kid movies. The boys talked about their experiences in making the movie and fielded some questions from the audience.