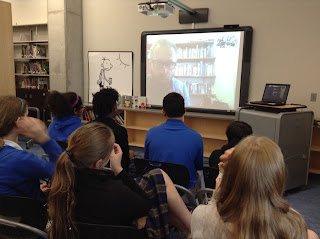 On Monday, October 26th, the members of Bookmarked were treated to a skype visit with author Geoff Herbach. He, like Jen Calonita, is published by Sourcebooks. I took advantage of the publisher's offer of free skype visits for libraries and classrooms as long as you purchase some of the authors' books. I chose Geoff Herbach for the high school book group because we seem to have so many female authors at school. Though the group is made up of a majority of girls, I figured all of the students would enjoy talking to Geoff. I was right.

He speaks without a filter, and the students loved his humor and willingness to address anything that they threw at him. Since he began the skype visit with a story about his son and puberty, one of the older girls asked him if he had difficulties during his own puberty. He told them that being a teenager was not easy for him. All agreed that it is not easy for anyone.

Another student asked him what was up with two of his books: Fat Boy vs. the Cheerleaders and Gabe Johnson Takes Over. They seemed the same, but they weren't. It just so happened that his publisher made an executive decision. Because some librarians complained that students wouldn't want to be caught reading a book with a title that begins with fat boy, the publisher changed the title for the paperback edition. In very teeny tiny print on the Gabe Johnson edition, you can see that it says the book is also known by another name. Geoff has had readers who were angry because they bought both books when they thought the books were different. It seems that Geoff likes the original title best, and in this case, it was out of the author's hands. The students liked the original title best, too. 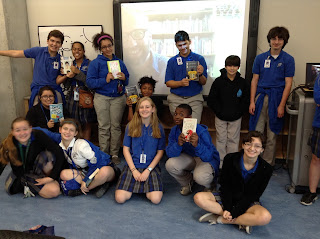 It was a fast-paced thirty minutes filled with lots of laughter. You can't beat that in the library. I want to thank Geoff for sharing some of his time with us, and Sourcebooks for making it all possible. Visit the library website for more pictures and information about the day. 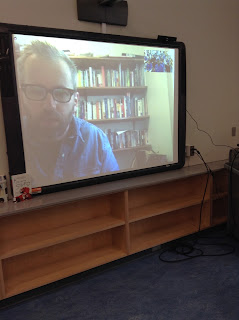