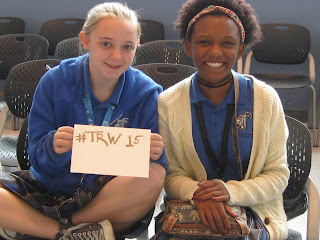 When the 2015-16 school year opened, PFTSTA had a growth spurt of 100 more students than last year. These additional students meant that the cafeteria could no longer fit the students in two lunch periods. Now there are three separate lunches. The library opens for the 6th and 7th graders lunch period at 11:00 and concludes at 1:07 when the 8th graders report to fourth period. I wasn't sure how this would play out for Teen READ Week (TRW) because the members of the high school book group always ran the events held during both lunches. The high school students are in third period when the little ones have their lunch. I decided that it was important for me to simplify this year, and in the end, I had helpers from both the middle school book group and the high school book group.It worked out that I did have the extra pairs of hands that I sorely needed. Also, I lost  a day of celebration when the students had no school on Monday due to the day of professional development and parent conferences. Even with these limitations, it was a busy and fun-filled week with lots of visitors in the library.

The theme this year was Get Away at your library. We took that to mean books about characters who had to travel. We always start off the week with some kind of video. This year we saw episode 20 from the first season of The Twilight Zone. It seemed appropriate because it was about three astronauts who ended up on an asteroid when their ship malfunctioned. All they want to do is go back home to Earth. There is a twist at the end, per usual, that the students did not predict. With the outer space theme, the treats served for the day were Milky Way bars and Starburst candies for those who don't eat chocolate. 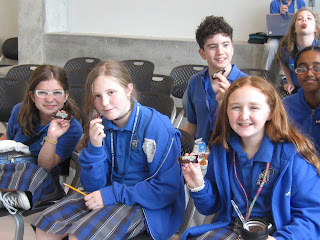 The next day the students played the guessing game that we have every year. The questions are always tweaked to fit the theme of TRW. Usually, we play the game every day. I have students who run the game, while I supervise the other scheduled activity. Instead for this year, I scheduled the game for only two days. On Wednesday, we called it Winning Wednesday. Students could ask a friend for help in answering the question. All winners won a small candy as a prize. On Friday, we called it Two-fer Friday. Students who could not answer the first question could pick a second one in hopes that they could answer that one. This game is always a favorite, and students will continue pulling clues even though they have already won their prize.

There is always a craft day planned during TRW. With the Get Away theme, I found wrapping paper with maps on them. The students created woven bookmarks out of the paper or woven bracelets. There was a bit of a learning curve, but there were several students who figured out the pattern quickly, and I tapped them to help the others. We ended up spending two days on this because the kids enjoyed it so much. I had plenty of supplies, so it was not an issue.


Students were asked to guess the number of Earth covered chocolates. Some used the mathematical formulas for volume to calculate the number, others weighed the jar, and others just took a shot in the dark. There were 533 candies in the jar, and the winner got to take home a third of the chocolate.


I do charge fines for overdue books, though there is a two day grace period. During TRW, I forgive fines for all overdue books returned during the week. Having the fines erased is a good incentive to return the books. I didn't count the number of books returned that were overdue, but it was a significant number--probably around fifty.

During the week, I asked students to recommend a book for their classmates.
Find more recommendations on the library website. 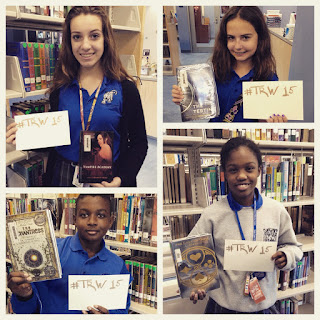 I also have a bookmark contest during TRW where the entries must fit the theme for the year. All entries are not due until the middle of next week. I give students over two weeks to work on their entries. Though, I don't get a large number of entries, what I don't get in quantity, I get in quality.

Look for lots more pictures for the week on the library website.