March 14, 2013
We always do some kind of craft activity during Teen Tech Week. I try to combine crafts and technology in some way. This year, I decided to use duct tape. On Wednesday during lunch, students visited the library to watch this video about making a duct tape phone case. I can't remember where I found the link to the video. It was either on the TTW Ning or the YALSA-BK listserv. Either way, I have a fellow young adult librarian to thank for pointing the way for me. I love that librarians think sharing is cool. It is what makes it such a great profession. 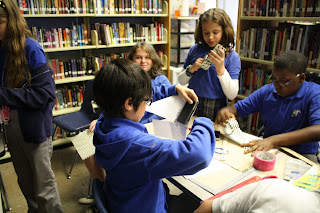 I digress. I went to Target and stocked up on rolls of fun colored duct tape. I think that I spent around $25 total because many of the rolls were on sale. Maybe those were discontinued colors. What I really liked about this project is that I didn't have to scramble for a lot of tools. Finding scissors and rulers was easy at school. Though I showed the students one technique via the video to make their case, they could make whatever they wanted. One student brought his Nook and make a case for that. Another ended up making the case sideways, but it worked equally as well. I had three books about duct tape crafts available, and several students decided to make bow ties and hair bows by following the directions in the books. One student made a ring. 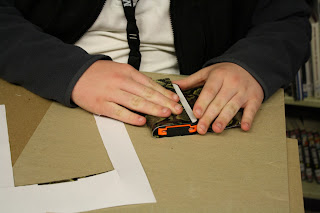 As usual, not too many high school students participated, but the middle schoolers were in heaven. At the height of the event, I think that there were 30 crafters in the library with me and one high school student available to help. Crazy. The students said that we should have a craft activity every week. I think that would be the death of me, but I am glad that they enjoyed it. At least, they will know that there will be crafting in the library again during next year's TTW.
Teen Tech Week TTW YALSA